It has been decided to make a Nature Park of this land. I (Bert Deane) have been asked to collect the history of the area known to older residents as the “Old Railway Reservoir”, and to some who have played there, as “Kickhorse Canyon”.

I am quoting from information kindly supplied by Bill Thomas. Jack Davidson, Keith Chenhall, Graham Morley. They are all long time residents of Traralgon.

Originally, this area would have been part of Hobson’s 28000 acre run, until about 1853. In 1853 the run was split in two, Edward Hobson bought Traralgon West and sold it to James Purves. In 1859 Duncan Campbell bought Traralgon West from Purves. Then Duncan Campbell kept 697 acres, and sold the rest to Melbourne buyers. It passed through several ownerships until in 1880, the Victorian Railways built a reservoir there, to supply their steam train engines. Apparently it was never cultivated, as natural Australian grasses still grow there.

A railway line from Sale to Melbourne was built, but building of it was started from both ends, Sale and Dandenong. The first train arrived at Traralgon from Sale on the 1st July 1877 – where their water came from for the first three years I do not know. 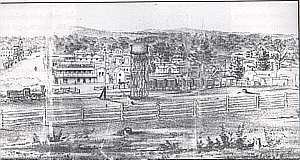 In the contemporary sketch, the elevated tanks are clearly seen, as is the Grand Junction Hotel, right, behind the steam locomotive.

In 1880 the Railway Reservoir was finished, and about a 10 inch cast iron pipe, conveyed water by gravity to large elevated tanks on the south side of the rail line. It was for railway use only (parts of this pipe are still visible).

A trolley track ran past the dam to a gravel pit in Dunbar’s – whether this track was used in any of the construction or maintenance isn’t known.

In 1884 after a large fire in the town, Traralgon Shire obtained the railway’s permission to extend the pipeline into the town for fire fighting purposes only. By the next February 1885, it was extended to Franklin Street.

In 1908 a water supply was laid from the Tyers river to Traralgon, apparently the reservoir then fell into disuse, and the wooden weir collapsed, this drained the reservoir and cut out the gully (canyon) from about 5 ft deep to what it is today, called “Kickhorse Canyon” – this water also caused a flood around the the rail station area.

The reservoir remained empty for some time, until the present concrete weir was built.

The Fish and Game Society (in those days a strong club) stocked the reservoir with trout to provide fishing, and held some competitions there. In the 1940 or 50’s the area became part of the Hobson Park Hospital Grounds, and during the 1980’s a pumphouse irrigated a vegetable area for them. Eventually it was found to be superfluous to their requirements, and ownership passed to the Traralgon City Council.

Consideration was given by the council as to the best way to use the ground, one suggestion, making it a Botanic Park, – it was estimated to cost something around $200,000 and consequently it was considered too expensive. Then selling part for housing was considered. Eventually it was decided in the early 1990’s trees would be planted and the park should be allowed to develop into a Natural Australian Bush Park. In 1992, gates, walking tracks and footbridges were formed, and the centre part fenced, with a grant allowed for work training of unemployed.