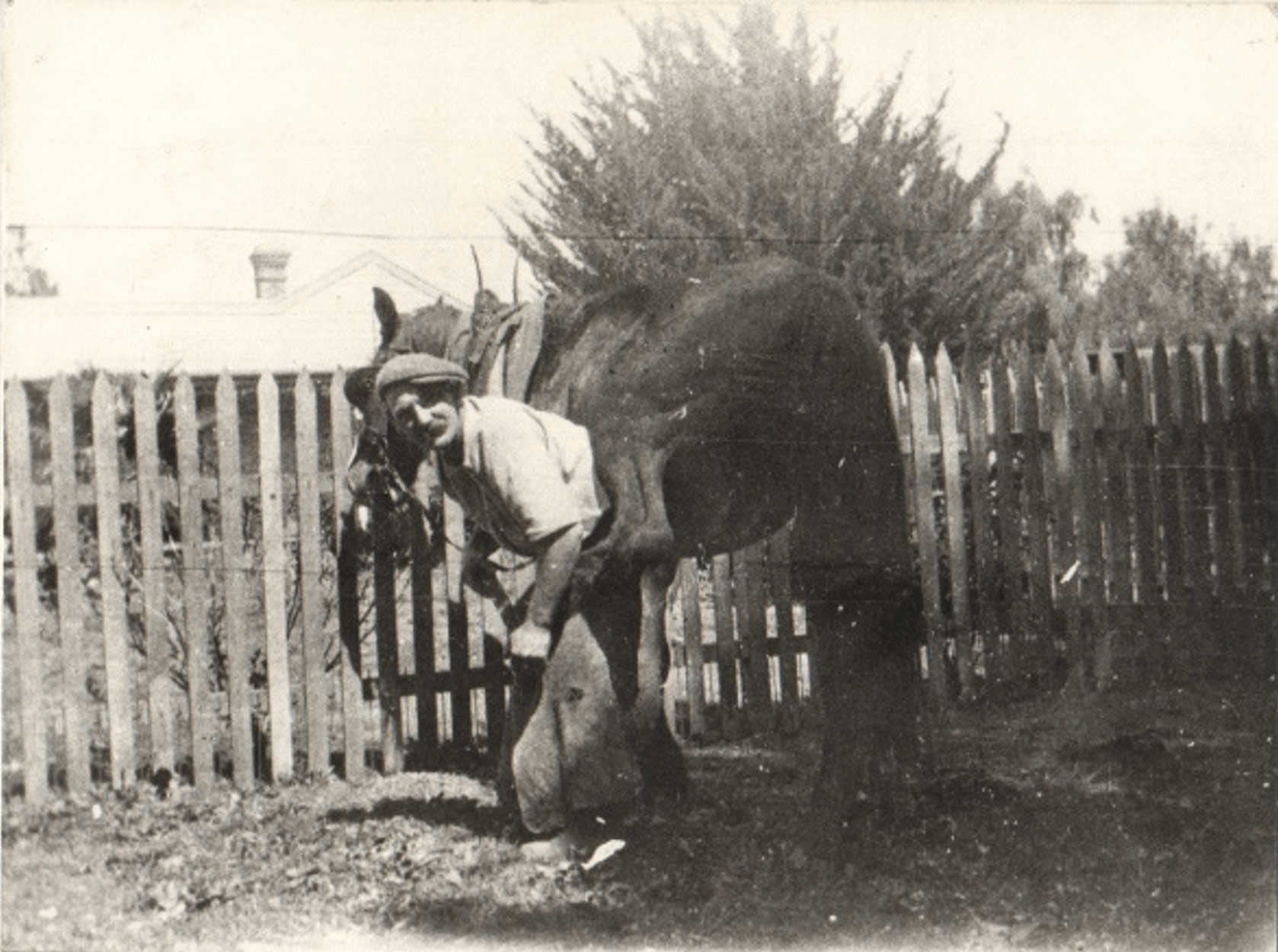 Traralgon was originally the home of the Kurnai Tribe of Aborigines who were a completely nomadic stone-age people.

The tribes living in Gippsland were in many ways more fortunate than those who inhabited the dry and dusty regions to the north of the state due to the area in which they travelled in search of food was smaller and a permanent water supply was available at all times of the year. As a result the people were better nourished and became larger in stature than many found in the northern states. The Lakes Area had an excellent supply of game and fish at all times and droughts were virtually unknown. The area was untouched by intruders in the early days except for occasional landings along the coastline by the whalers and sealers who did not settle but left after they had rested and replenished their water supply.

In Victoria by 1840, all the fertile country was settled. and there remained for occupation one portion - the isolated timberlands of Gippsland stretching from the coast to the Australian Alps. Much of this country was swampy and useless, other parts too densely timbered for penetration, but on the river flats there was ample grazing land. The obvious ways to explore this unsettled land was from the newly established settlement at Port Phillip, or by sea, from some point along the coastline - but strangely enough the explorers elected to travel in from the more difficult overland route, and to arrive from the Dividing Range to the north. Mainly because, at this time the settlers in the Monaro District of southern New South Wales were experiencing drought conditions and they were urgently requiring fresh pastures for their starving stock, also a port to enable them to ship their cattle to the waiting markets in Melbourne and Tasmania.

[Source: The Growth and Development of Traralgon and District, compiled by Jean Court, 19??]ref00171]

The first European occupier at Victory Park was the Hobson family.
More about the Hobsons can be found in “River of Little Fish.” By W. Cuthill (1970) Chpt. 2. At TDHS.

When Edward Hobson reached here in 1844 he was able to take up the run for which his brother, Dr. Edmund Hobson had applied in Melbourne. He took the land on both sides of the Traralgon Creek and his run went from the river out to Traralgon South and two and a half miles west from the creek towards Morwell. ……….

It must have been the Hobsons who gave the Traralgon run its name. The name comes from the aboriginal words "Tarra", meaning a river, and "Algon" meaning little fish,  [ref RofLF p.13].

It was in October, 1847, that Dr. Hobson first came to Traralgon to see his run. Edward Hobson's first baby, Teddy, was born at about this time, and maybe that is why the Doctor was here. He wrote a letter to his wife, and spells the address "Tralgon". …. part of what he wrote:

"The country is by no means an interesting one, being very thickly timbered, except on the banks of the rivers, where the plains are extensive and exceedingly rich. On my run I could plough 1,000 acres of the richest soil in the world without cutting down a tree. In sight of the hut there is a splendid mountain, now white with snow, rising to the height of 5,000 feet, to which, if I have time, I am very anxious to go before I return." [ref RofLF p.20]

In March 1853, the gentlemen looking after Dr. Hobson's runs (Dr. Hobson died in 1848) decided to cut the Traralgon run into two. They called the two halves Traralgon East and Traralgon West. ………which was the half lying on the west side of the creek. …was sold to Edward Hobson. [ref RofLF p. 25]

From 1845 people began to arrive in the area settling where the town now is. Thomas Windsor was one of these settlers being appointed as an overseer for Hobson. Thomas came with his wife, Elisabeth, and two small children (Thomas & Eliza). He built his home, a wooden shack, on the high ground west of the creek on the site of the original Methodist Church (in 2022 this is the flattened empty block on SE corner of Post Office Place and the highway).

In 1855 Duncan Campbell and his brother, John, came to Traralgon from Runs at Maffra and Bruthen. Duncan bought the Traralgon West Run from Purves. John was a drover. The Campbells built their Homestead at the northern end of Breed St. It was known as Traralgon Park. Very quickly Duncan owned almost everything in the area. More can be learnt about the contributions of the Campbell family in RofLF Chpt 3 specifically, available at TDHS. 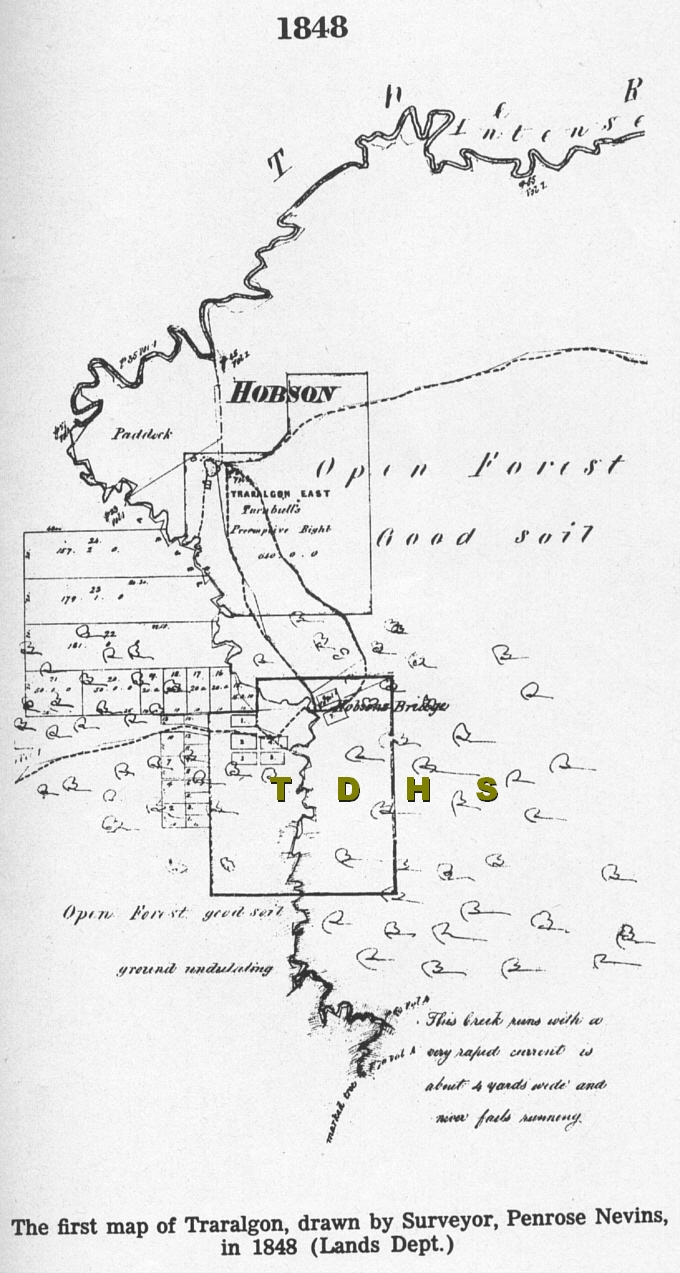 The 1858 Government Survey/Plan included names for the streets, this marks the beginning of the ‘formal settling’ of the area so named “Traralgon”. Now that blocks/lots were identified they could be sold.

The first land sales were conducted 29th. August 1859. Those sold were outside the Town boundaries of 1858. The first blocks within the town boundary were sold at the end of 1859. [RoLF p.30]

From time-to-time further blocks in the township were offered for sale. Not always successfully. 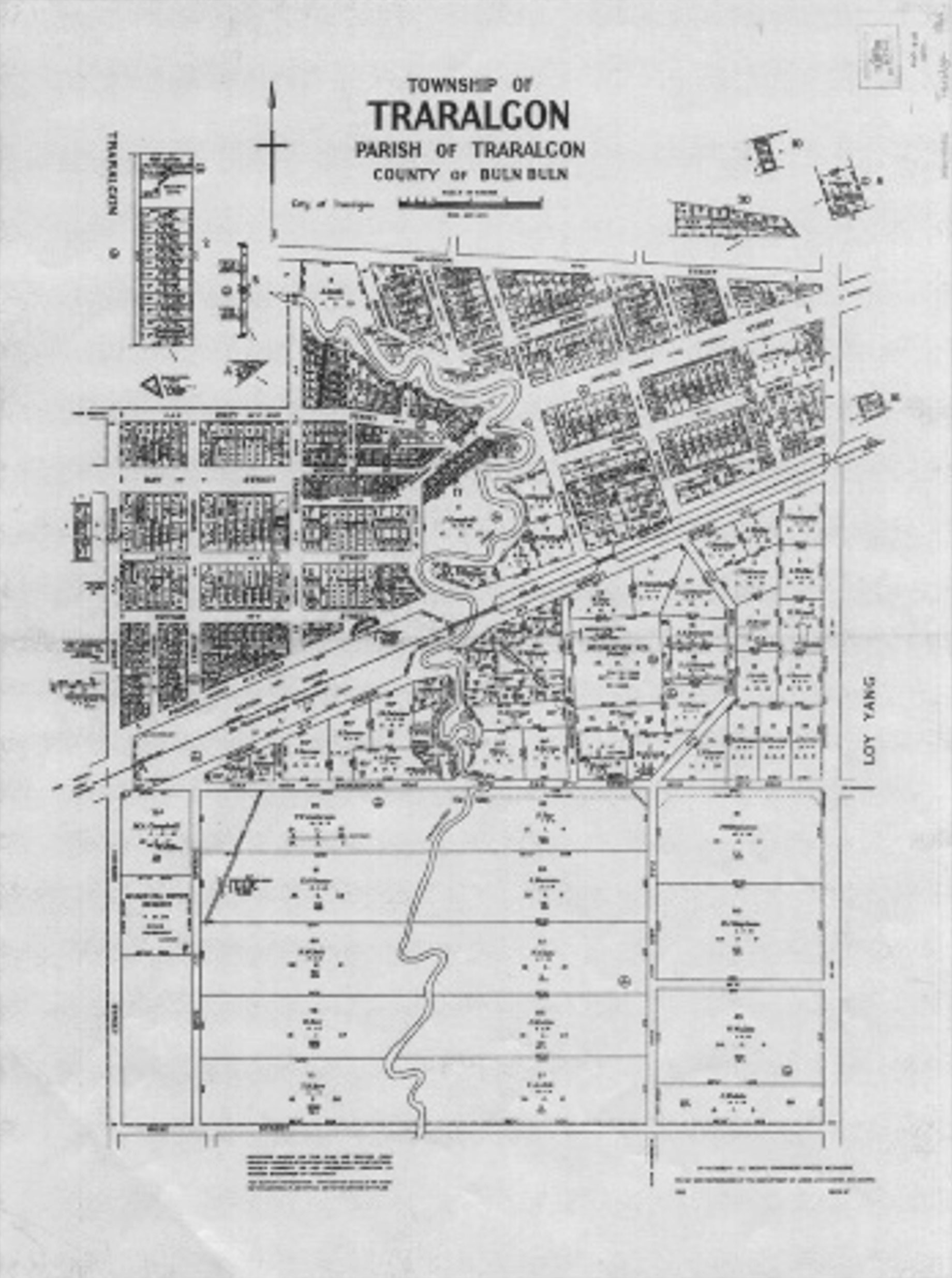 In the year 1870 there were many applications for land and, when we read some of the names, and how much land they had already, we wonder how greedy they may all have been - Nicol Campbell, C. N. Henderson, John Campbell, Dugald Campbell, James Campbell, J. F. Turnbull, J. O'Connor, Kate Campbell and Peter McColl. [RoLF p. 39]

John Campbell is shown as the first owner of the land that includes todays Victory Park area. It is noted on the map printed in 1960 (see photo on board or here) that J. Campbell purchased the area in 23/10/1868.

People still thought that Traralgon would grow up around Argyle Street for, when the Government held a sale of some land in November, 1875, blocks between Seymour Street and Hotham Street near the "Journal" Office could not be sold, while small blocks intended for shops on the flat between the Methodist Church corner and the creek were snapped up like hot cakes. [Rolf p.46] The purchasers of these blocks are given on the 1960 map – naming from the Methodist Church Corner to the creek OR from West to East – O. Marriage; G.J. Hurren; E Dunphy; J. Williams; C. Neville (2); C. Widdis; E.Haxell; A.Haxell.. The most easterly land on the creek was owned by C. M. Sanders.

In 1888 Thomas Albert Williams bought the property known as “Long Bridge” which was situated in the bend of the Creek near the bridge. Thomas was a blacksmith and wheelwright in Hotham Street. Eventually he moved the business to Argyle Street operating the “smithy” with his son Frederick. At this time other residents in Argyle Street included Lay; Lawson; O’Grady [TDHS files]. Fred and his wife Maria moved into “Long Bridge” home after WW1. After Maria’s death in 1974 (Fred had passed in 1951) Traralgon City Council bought the site. A plaque was placed on a tree to commemorate the Williams ownership.

Jean Voss, a daughter of Fred and Maria, recalled the residents along Argyle Street in the 1930’s were from West to East – Hawkins/Sawyer; Sawyer; Hodgekinson; Watson; then the Forge.

In 1939 the Traralgon Water Trust prepared a plan for the Sewering of the Town. At this time there were 3 weatherboard houses shown on the north boundary plus a large Homestead and 11 small huts (APM workers) on the south side of the Park. [ref. TDHS files ‘Sewerage Plan 1939] 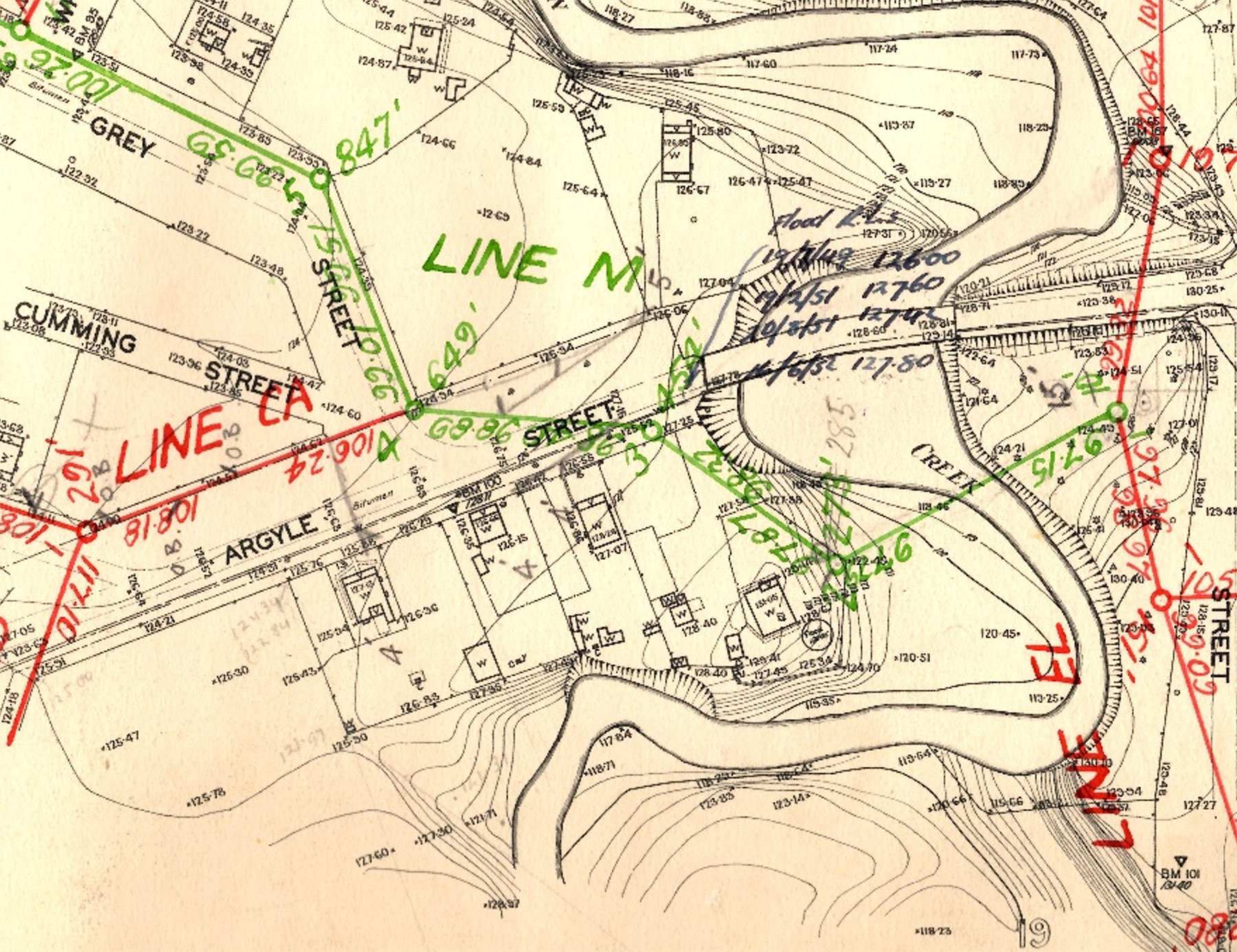 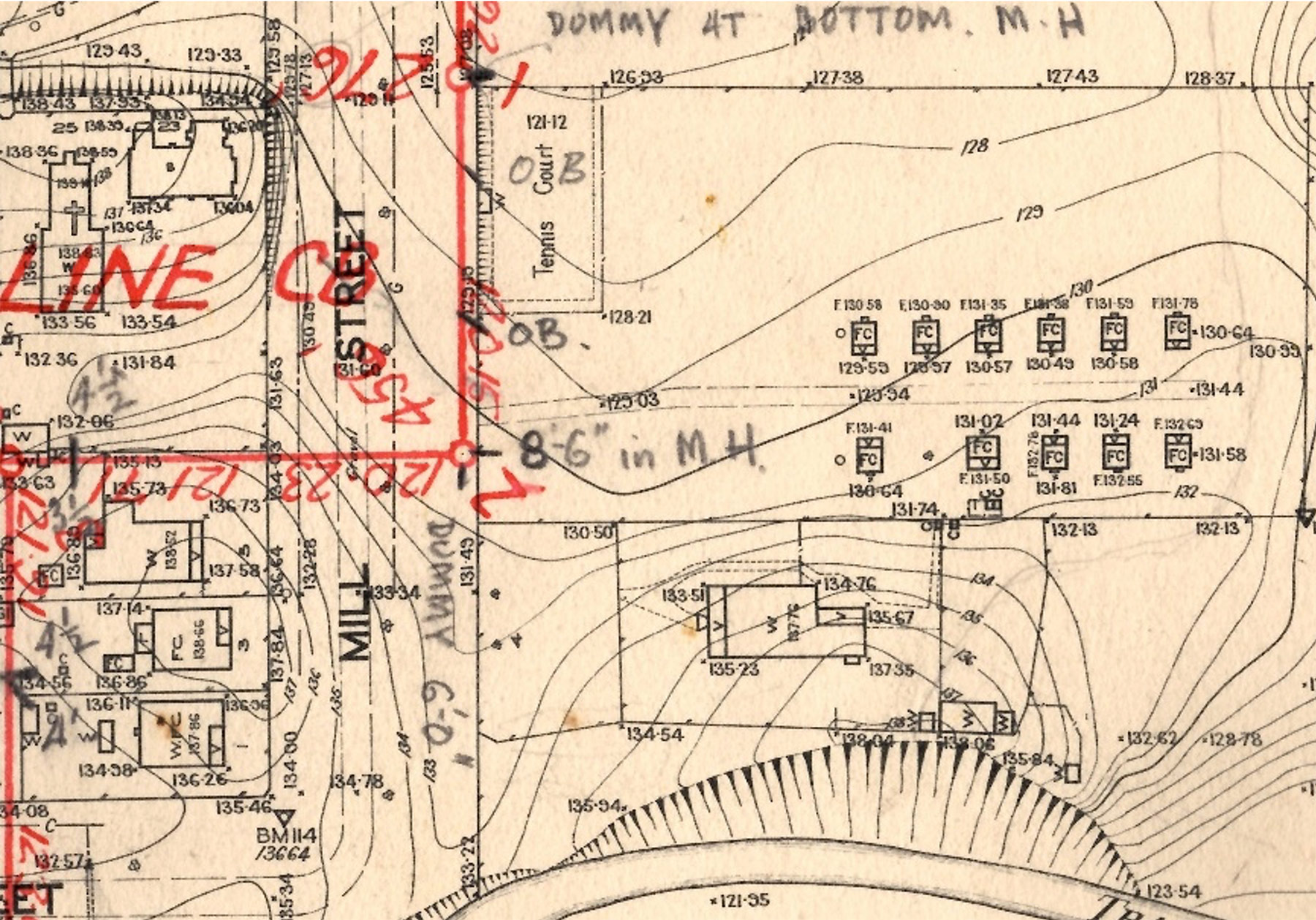 The large House on this map was built in 190? By T. H. Waite who had purchased the land from??? In ?? This later became the Homestead of W. Christensen who farmed the land from 1920 after the Waite’s had left for Melbourne in 1919. [most references state that D Christensen built the homestead!]